Second edition of the Test Session

The pandemic is once again affecting the downhill season, albeit not as seriously as last year. Nevertheless, everyone had to wait for the start of the race season and so half the world's elite seized the opportunity of the NotARace - iXS Cup Test Session in Schladming. 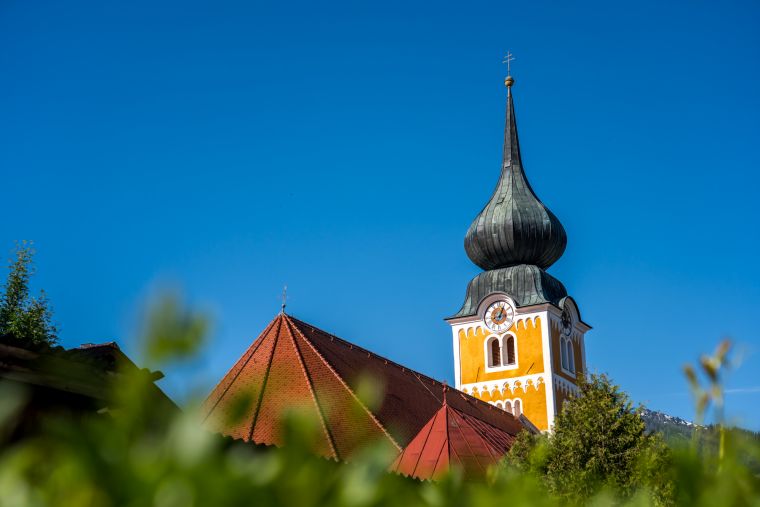 Last year was more of a year to forget for the iXS Downhill Cup, one of the few highlights worth remembering though was the NotARace in Schladming, 2021 will certainly be a lot better. It is already becoming apparent that a few races can be expected and even the series with sufficient runs will probably come about. Still the season started late, and this was the reason why a second edition of the “ NotARace - iXS Cup Test Session” was held in Schladming.

Without further ado, we called the people in charge, who were involved into last year’s organization in addition to Racement and used the opportunity of another late start of the World Cup season. Schladming is the perfect place and with local Markus Pekoll, an enthusiast was joining there who pulls all the stops for sport. Then there was Wyn Masters again, who supported this kind of non-event and ensured that everyone who was addressed, immediately wanted to join.

This time the place and date were, of course absolutely perfect, as the World Cup was about to start the following week in nearby Leogang. This condition enabled from the start an optimism, that half the world's elite would accept the given invitation. That was exactly what happened and resulted in an absolutely top-class list of participants. The whole thing was rounded off by the fact that SRAM / RockShox and FOX grabbed the test session by name and used it to improve the suspension setup of their riders under optimal conditions with a race time measurement. The field of participants was roughly doubled this time compared to 2020, but this was the absolute limit of what is feasible and what is feasible regarding the current Corona regulations. 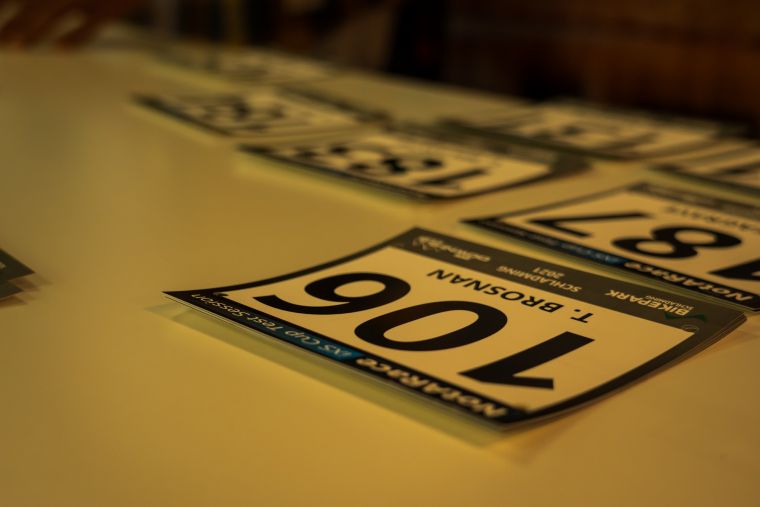 As with the first edition, there was great interest from the relevant MTB media and the well-known reporters sent their representatives. In the end, with the productions and reports from Red Bull Media House, Pinkbike, VitalMTB and a few more, as well as the social media products of the actual participants, a considerable amount of content was created that delighted the still hungry MTB community around the world.

In contrast to the previous year, this time the lower part of the World Cup track of the Bikepark Schladming was used and in addition to last year there was also an intermediate time and speed measurement in order to increase the informative value for the comparability of the test-runs. Furthermore, the entire technical setup of the iXS Downhill Cup was available, which turned out to be quite useful for a test session due to the live timing option, for example. 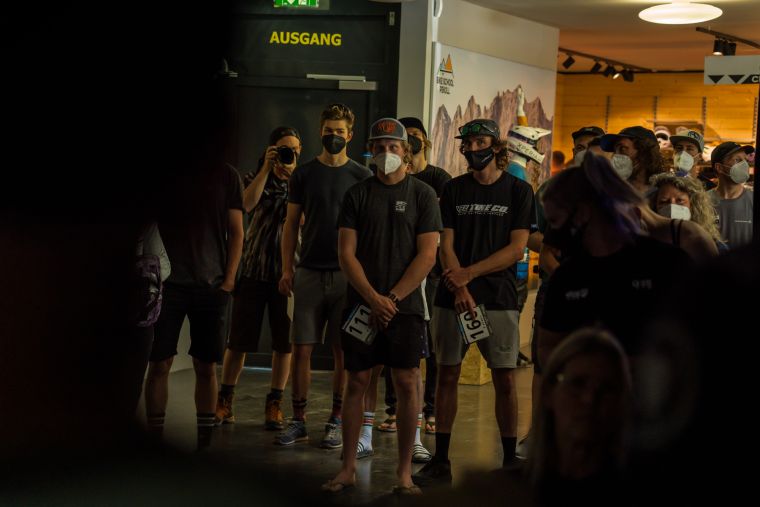 It all started on Thursday with the team manager meeting at the Pekoll bike school to explain the most important things to everyone. Then it was time to have a closer look on the track before the test runs started after noon. The key data of the route were 1.500 meters in length and 345 meters in height difference. The weather was good and so was the mood. Somehow everyone seemed to really enjoy it, a familiar environment and probably one of the most popular tracks, to get in tune with the material for the coming season. 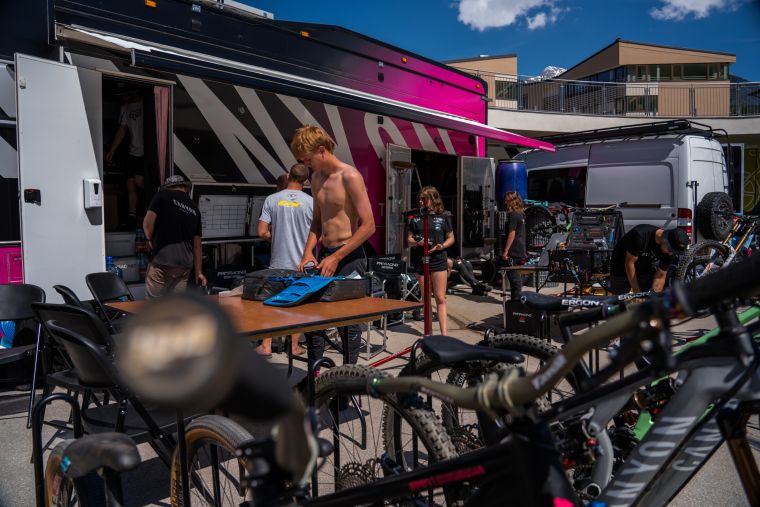 But others had completely different obstacles to overcome, for example Loic Bruni (FRA - Specialized Gravity), who injured his heel a week ago. The four-time world champion used Schladming to test whether his short stay at the Red Bull APC had the desired effect. Anyway, during the test session you couldn't recognize from the outside that something was wrong with him. 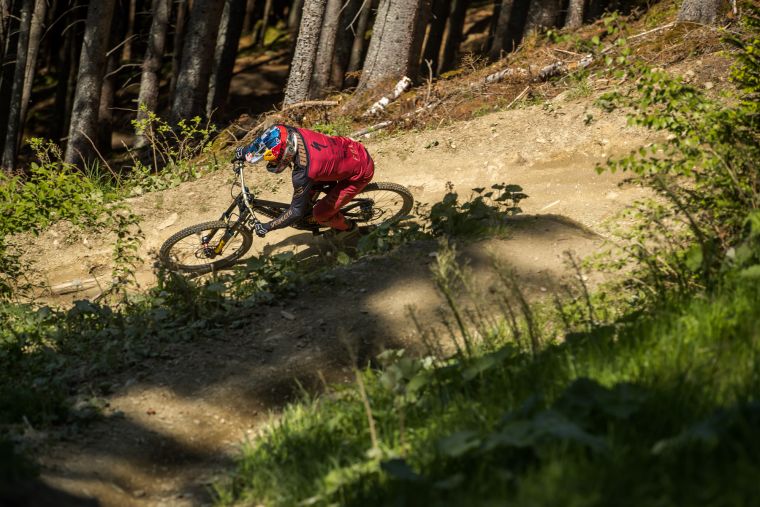 Many of those present did three to five timed runs, but Luca Shaw (USA - Santa Cruz Syndicate) and Wyn Masters (NZL - GT Factory Racing) were really keen to know and did a total of six runs. By the way, the fastest of the day was Bernard Kerr (GBR - Pivot Factory Racing), who ripped an impressive time of 2.22.151 minutes. And even if the results were not in foreground, the times were pretty tight in the end, with Joe Breeden (GBR - NS Bikes UR), Danny Hart (GBR - Cube Factory Racing) Greg Minnaar (RSA - Santa Crus Syndicate) and Loris Vergier (FRA - Trek Factory Racing) four riders placed within the same second. 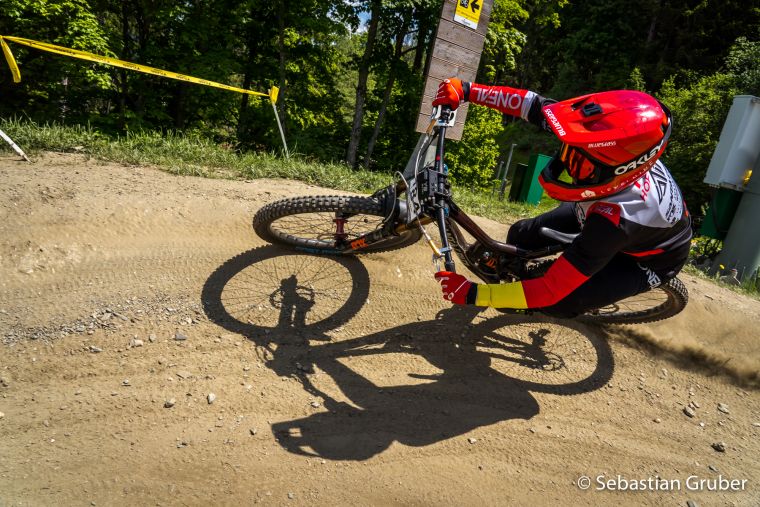 The fastest woman was Nina Hoffmann (GER - Nina Hoffmann Racing), who seems to be quite hungry for another World Cup victory this season.

Friday started again with optimal conditions, and nothing stood in the way of a relaxed end to the test session. In the morning the riders had another hour of free practice before the time measurement was switched on again for three hours. Most of them used the time span and did three to four more runs. This time the fastest was Joe Breeden (GBR - NS Bikes UR), followed by Danny Hart and Loris Vergier. Here you can watch the fastest run of the day:

In the women’s category, Vali Höll (AUT - RockShox Trek Race Team) was able to pull out a lead of almost four seconds, which should give her a lot of confidence for the next week. 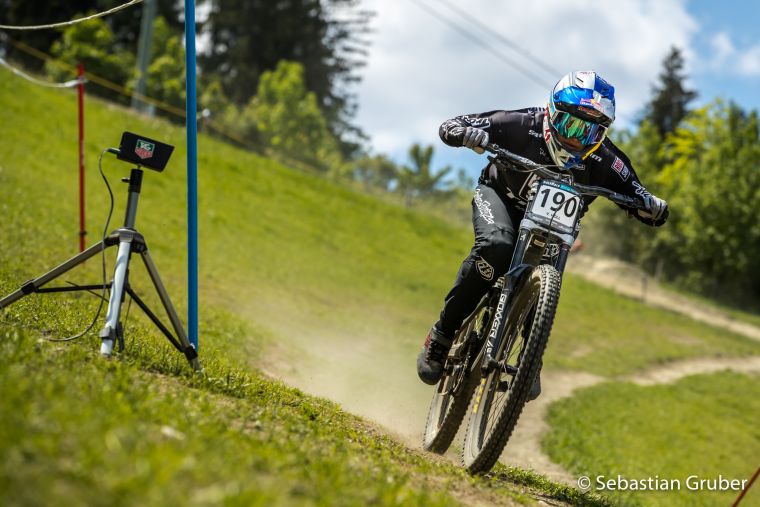 Valentina Höll needed in her third run only 02:37.532 minutes

In the early afternoon the second edition of NotARace - iXS Cup Test Session was history and the concept worked out once again. Everyone involved seemed to have had a lot of fun and it almost seems like one could get used to such a season opener.