In this rather quiet time, we want to devote ourselves to an important topic that occurs more frequently in our sport and should never be taken lightly. A concussion can have long-lasting consequences, and with each successive one, the risk of devastating consequences increases exponentially.

Concussions are injuries to the brain that are often underestimated, undetected, and therefore not properly treated. In a long-term view, this can lead to lasting and life restricting consequences. Mountain biking has an increased likelihood of injuries and therefore also of concussions. Our aim is to increase awareness of the correct treatment and the seriousness of this type of brain injury. 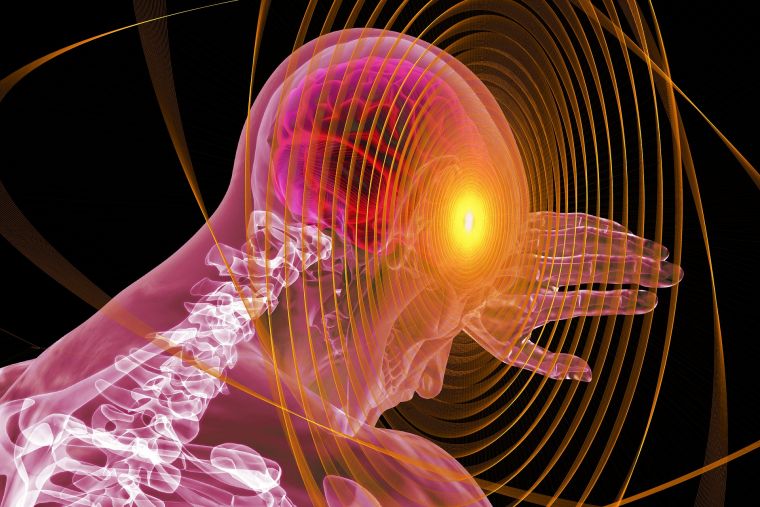 The brain controlls everything in our body, that's why taking care of it is indispensable.

Symptoms and course of action

Concussions are very often the result of a crash or caused by a heavy impact to the head. The most common symptoms include headache, dizziness, difficulties concentrating, sore throat and neck, and nausea or vomiting. The past assumption was to only consider people, who had lost consciousness during the trauma, as concussed. However, it is now known that unconsciousness as a symptom rarely occurs. Often the symptoms of a concussion appear with a delay of 6 to 12 hours after the event. This is important to keep in mind and you should stay alerted, for the symptoms mentioned above, for 24 hours after the impact.

In case of a suspected concussion during one of our races, the rider should see a doctor as soon as possible. The recommendation in the case of an acute incident is to lie down with the upper body in a raised position. The consciousness of the rider must be monitored all the time and someone should speak to the crashed person to calm him / her down if necessary. It is not recommended to remove the helmet of the injured person by a third party unless they have been specially trained to do so. 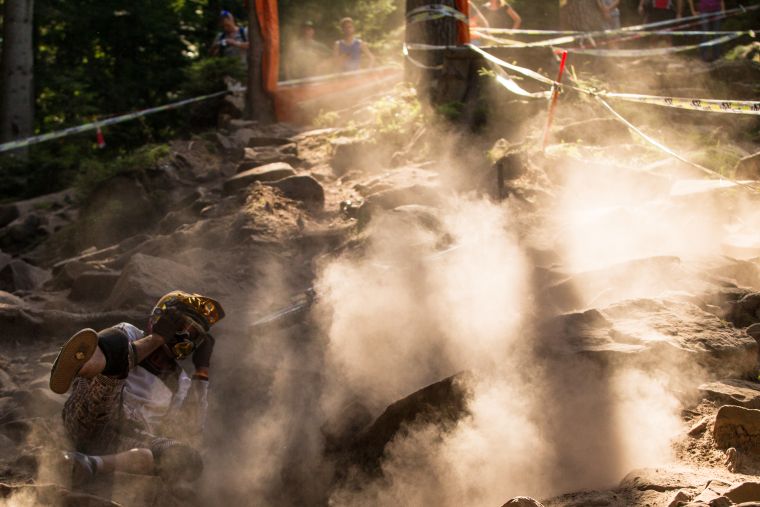 The most effective treatment is immediate physical and mental rest to give the brain time to recover. According to the Apotheken Umschau, around 97 percent of all concussions heal within the first four weeks. In this phase the load can be increased slowly. If the condition worsens, however, the exposure should be reduced again. During the recovery phase, neither alcohol nor drugs should be consumed, and no vehicle should be driven in the first few days. For future health, it is essential to let the concussion heal completely and not to expose yourself to potential blows to the head early on. Only a doctor can decide if the operational readiness is fully restored.

The term Post-concussion syndrome (PCS) describes many different symptoms that can be contracted by a concussion. These symptoms can last for weeks, months, years, or your entire life. About 15 percent of all people who suffer from a 1st degree TBI develop a PCS, accoridng to the association "Kopf hoch e.V. - aktiv gegen gehirnerschütterungen". The symptoms of this syndrome most commonly affect one or more of the following areas: cognitive functions, physical and emotional well-being, and the sleep cycle. The trigger for this syndrome is still unknown. However, experts agree that the chance of a PCS increases with each concussion a person suffers. The post-concussion syndrome is not treatable, only the individual symptoms can be cured.

If the concussion has not yet fully healed and the head receives a second impact or trauma, the brain can react with swelling (cerebral oedema). Even light hits can be enough to lead to the Second Impact Syndrome and have dire consequences such as physical and mental damage. Especially in mountain biking is a higher risk to develop a second impact syndrome. Many riders finish a race after crashing and an associated concussion can occur. Furthermore, this tendency can lead to additional crashes in the same run and cause more trauma. In those situations, health should always be more important than athletic success. 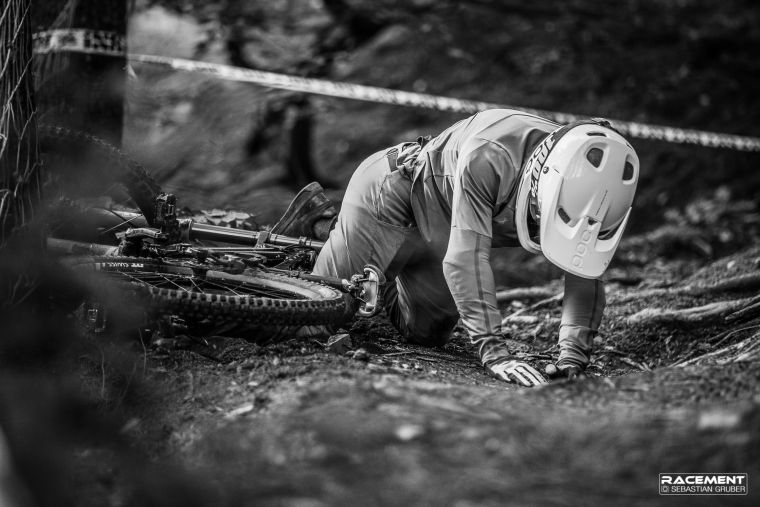 Even if the crash happened a few days ago, it can still have an impact on your brain. Therefore, any crash shouldn't be underastimated.

Chronic traumatic encephalopathy (CTE) can occur with repeated brain injuries. CTE is a brain disease with dementia-like deposits in the cells. An examination of deceased American football players revealed these structural changes in the brain. These players often suffered from outbursts of anger, changes in character, depression and, in some cases, dementia. The person concerned rarely committed suicide.

In various sports there is an increasing awareness of the seriousness and consequences of concussions. To reduce the number of concussions, the National Hockey League has introduced measures such as educating players about concussions and their consequences.

The DFB (German soccer association) has also introduced mandatory brain tests for all 1st and 2nd Bundesliga players from the 19/20 season. Before the start of the season, various sub-areas of brain function, such as balance and memory, are examined. If a concussion is suspected, the team doctor can check the areas examined. If there are deviations, the doctor can come to a more precise diagnosis. The player will not be allowed to play again until normal status has been reached. 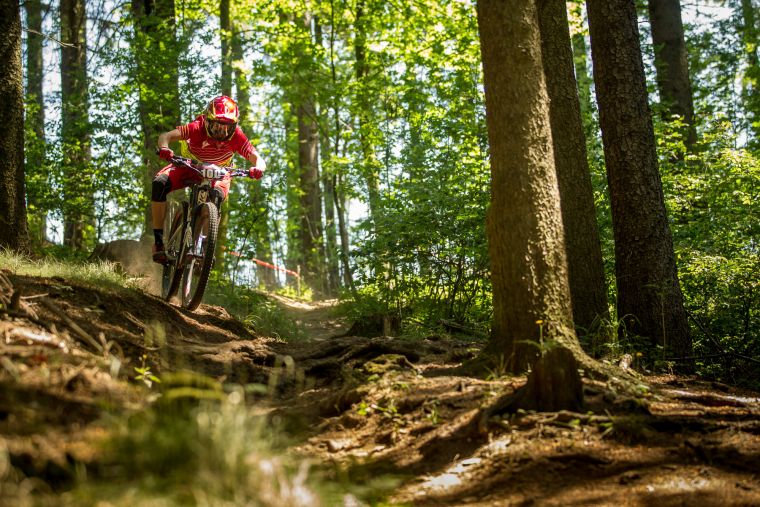 Anneke Beerten still has consequences after her concussion almost one year ago.

A current example of long-lasting consequences of a 1st degree TBI is the well-known and very successful mountain biker Anneke Beerten. She suffered a concussion in a car accident last August. At first, she assumed that the concussion would not have any serious consequences and that she would be back on the bike after a short time. However, she had underestimated the concussion. A few hours after her accident, she experienced headaches, language problems, memory deficits and a stiff neck. She developed motion sickness such as nausea and dizziness. She was torn from her active life and suddenly ran out of energy. The smallest things were difficult for her, even light or noises drained her strength. To find out in which area the brain got injured and how severe it was, she was referred to a rehab for traumatic brain injuries. After a two-hour test, it was clear that her balance and sight were severely impaired and did not work together. Anneke is on the mend and has already made great strides in her recovery to be able to pursue her passion again as soon as possible.

Anneke Beerten is not the only example from the mountain bike scene. In 2015, the very talented BMC elite rider Lorraine Truong crashed and suffered a concussion while in an EWS race. She is also still struggling with the consequences. For more Information check out the article about her from the ENDURO Mountainbike Magazine

There are several factors that you can determine yourself to avoid a concussion. On the one hand, it is essential to have the right equipment. Above all, you should make sure that you wear a high-quality and certified helmet, for example. A helmet must be replaced after a hard impact to provide maximum protection. On the other hand, you can train the crashing technique so that you can intuitively roll off correctly in the worst-case scenario. Strengthening the muscles in the neck and neck area is also a good preventative measure. Despite all preventive measures, traumatic brain injuries with serious consequences can occur. Injury to the brain should not be underestimated as it can affect the entire life and lifestyle of the person concerned.

At this point we would like to draw your attention to a free app ("Gehirn-Erschüttert-Test-App"), which enables everyone to recognize a possible concussion with questions and various tests. The app is compatible with IOS and Android devices. The result of the test is not a medical diagnosis, so a doctor should be informed in any case. 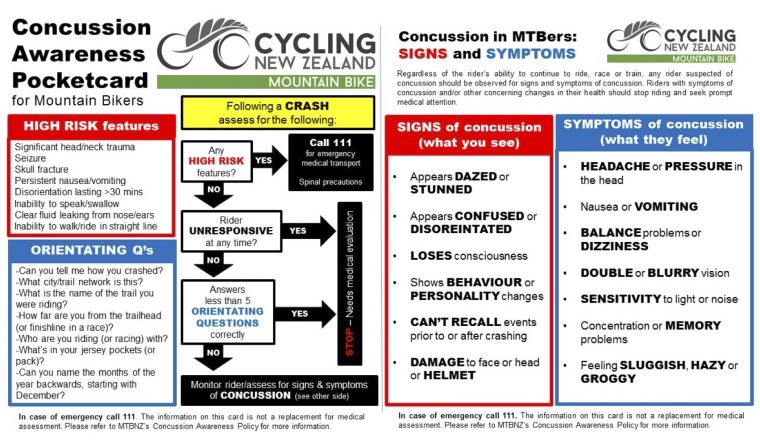 Cycling New Zealand created a "Concussion Awareness Pocketcard" which summarises what should be done if a concussion is suspected.